Over the summer a motion for an ethical investment policy was rejected by the University Council on the grounds that it was 'impractical', and our good friends in management used this as an excuse to go back on their agreement not to invest in arms companies. This is an outrage, and Cardiff Students Against War is mobilising to push for an ethical investment policy over the coming year. There will be a public meeting soon on the subject of ethical investment, and how to expand and escalate our antiwar campaigning over the coming year.

Exciting times! Now it's time to step up and get active. We made some real progress last year with the occupation - we rattled the management of a serious university - but now we need to build support for our campaign, and build a mass movement on campus for ethical investment.

The time has come to make real change at this university.
Posted by Cardiff Students Against War at 2:37 PM 8 comments:

Well, the public meeting was a success, and it was great to see so many fresh faces debating the issue with the big names. I certainly learned a lot; every time Andy and Becky speak about their experiences volunteering in the West Bank with ISM I always feel a terrified, disgusted yet determined urge to go out there. Chris Nineham from Stop the War Coalition was also a powerful voice, urging and inspiring activists to take charge of their movement for peace around the world. Dr Marcello Svirsky expressed his support for our campaign, adding that it was very hard for him to see his native Israel behaving in the way it does. And the letter from Gaza read by Leanne Wood AM, which attempted to describe the extent of the devastation after the Israeli bombing, left the room stunned.

The next event CSAW recommends for everyone is the Debating Society event on Friday: 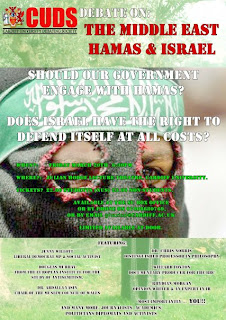 DEBATE ON: THE MIDDLE EAST AND BRITISH FOREIGN POLICY
TOWARDS HAMAS AND ISRAEL

Friday 20th March 09,
18.30-20.30,
Julian Hodge lecture theatre,
Colum Drive (Just off Colum Rd) CF10 3EU.
"At least in spirit, British foreign policy is dictated by the will of the people. This means being heard is paramount and expression of one’s concerns and beliefs has never been more important. However, how we express our concerns and beliefs has never been so chaotic. We hear a great deal of emotionally charged, shouting and chanting but we no longer get to take part in discussion and debate and without understanding the merits of each other’s opinions a peaceful solution cannot be created here let alone be applied in the Middle East."

Douglas Murray - Neocon Author, member of the European Institute for the Study of Contemporary Antisemitism, former director of the Centre for Social Cohesion in Westminster, London & support of Israeli right to defence.

Dr. Abdalla Yassin – Social activist and Chair of the Muslim Council of Wales.

Dr. Chris Norris – Distinguished Research Professor in Philosophy, An out spoken critic of the Israeli occupation in Gaza and leading literary critic.

Willard Foxton – Barrister, novelist, and documentary producer for the BBC.

The organisers promise a fully interactive debate whereby people from the floor can make themselves heard. Therefore it is really important that we get a strong pro-Gaza contingent down to the event to argue that the reality of life for Palestinians is unbearable and should be unacceptable for the international community. The British government made token noises of condemnation during Israel's blitzkrieg in January, and then sent warships to join the naval blockade of Gaza, effectively helping Israel ensure that this marginalised, impoverished civilian population, who had just endured 22 days of assault from the land, sea and air, were still blockaded in their strip of land without adequate access to aid.

Anyway. Cardiff Students Against War is going to be relatively quiet for a couple of weeks as we all have essays and dissertations to finish in barely adequate periods of time. But stay tuned! We plan to be highly active next term, and plans are already underway for film screenings, and a benefit gig that looks set to be a corker!

If you want to do something RIGHT NOW we would greatly appreciate it if you could send Cardiff Uni Vice Chancellor Dr David Grant an email in support of scholarships for Gazan students. A template email is below; just copy it, paste it into a new email, edit what you like and add your name to the end, then send it to v-c@cardiff.ac.uk. The more you can personalise it the more impact it's going to have, so feel free to let Dr Grant know some of the realities of the situation in Palestine, but remember to keep it polite.

I am writing in support of a student campaign to provide 5 one year scholarships to students from conflict areas, with some reserved for Palestinian students.

I believe that through its investments in the arms trade, Cardiff University was complicit in providing the weapons which have destroyed the lifes of so many Palestinians, and the bombing of schools and universities in Gaza has undermined the universal right to education. Therefore we as a university community have a duty to provide students from Gaza with access to education.

A Gaza awareness meeting was held last week which was well attended and very supportive of this campaign.

I ask you to reconsider your previous decision not to provide scholarships and provide real material aid to those affected by the terrible attacks on Gaza.

I look forward to your reply.

That's all for now, stay tuned for our up and coming events!

Dan
CSAW
Posted by Cardiff Students Against War at 11:27 AM 5 comments:

GAZA IS STILL THE ISSUE

A public meeting on Gaza, the right to education and the continuing struggle for Palestinian human rights. Come and find out more about the issue of Gaza, and what you can do to help. Featuring renowned guest speakers including:

There will also be a panel of students from the occupation, and plenty of time for open discussion from the floor.

Free admission. All welcome =)
Posted by Cardiff Students Against War at 11:17 PM 4 comments: 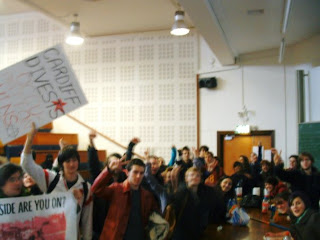 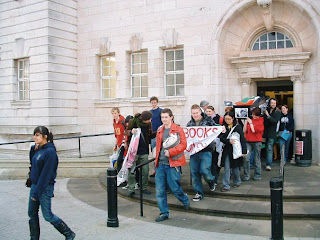 Procession from the Shandon Lecture Theatre 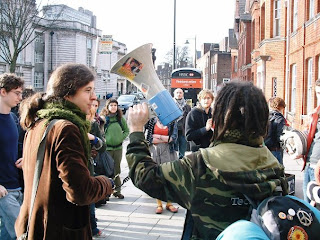 Final rally held outside the union to applause from other students 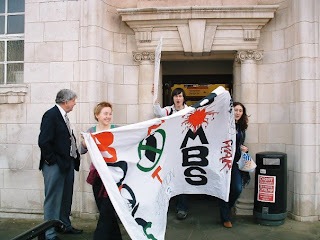 Posted by Cardiff Students Against War at 5:08 PM 2 comments:

Photos of the End of the Occupation 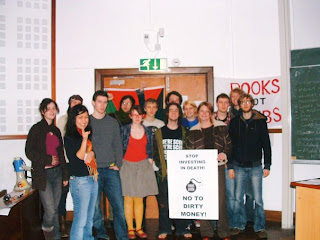 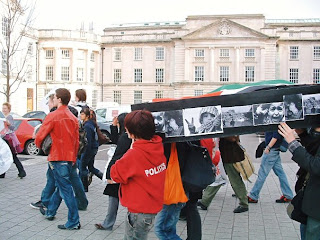 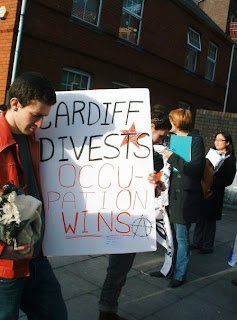 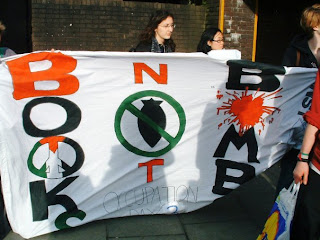 Posted by Cardiff Students Against War at 5:00 PM No comments:

A link to a short film on the Cardiff Occupation:

http://www.youtube.com/watch?v=5GyVGfJDyMw
Posted by Cardiff Students Against War at 4:50 PM No comments:

Cardiff Students Against War is ENDING OUR OCCUPATION of the Large Shandon lecture theatre, Cardiff University Main Building! We're about to leave, march around campus to declare our victory, and make our continued presence known to the university community. Banners and megaphones, BOOKS not BOMBS!

Following the open letter to Vice Chancellor David Grant, the BOOKS not BOMBS demonstration outside the Student Union and the subsequent occupation of the Large Shandon, Cardiff University has divested all shares from BAe Systems and the aerospace arm of General Electric! They have instructed their external fund managers to avoid future investments in the arms trade, and have promised to raise the issue of an ethical investment policy at the next Council Meeting on May 18th. They are also willing to discuss the provision of surplus computers and resources to institutions in Gaza.

The victory comes after three days of occupation which has been inundated with messages of support from all over the country, as well as further afield. This has included university staff, students and societies, local Plaid Cymru politicians and groups, activist groups such as CND Cymu, No Borders South Wales and South Wales Anarchists, and has had extensive press coverage, from the local papers and student publications to Indymedia and the BBC. We are extremely proud to have received a message of solidarity from Noam Chomsky!

We see this as the beginning, not the end. The occupation has attracted considerable interest and support from the Cardiff University community, and has succeeded in raising awareness of the effects of the arms trade and the horrific situation in Gaza. Cardiff Students Against War will continue to campaign on these issues, and to make sure that the university doesn't go back on its promises.

So well done to everyone who has been involved!!

But it's not over yet. The campaign will continue because we believe that Cardiff Uni should be doing more for Gaza, such as facilitating scholarships to Gazan students and boycotting Israeli products in protest at the treatment of Palestinians by the IDF, and the settlers occupying the West Bank.

Lets all go for a drink to discuss what we've got, where we want to take the campaign, unwind after several fraught days and generally get a little bit pissed :)

We need to seriously discuss our next step. The occupation was a great experience, made highly significant progress on its aims and succeeded in bringing this issue to light. But it ain't over yet, there are still 1.4 million people trapped in Gaza with no homes, very little food, no access to work, and, according to the Gazan students we talked to last night, continued Israeli aggression despite the ceasefire. We want the university to facilitate scholarships for Gazan students, a boycott of Israeli products in uni shops, an official day of action and definite fundraising activities to ease the humanitarian situation there.

So if you take anything from this email, it should be that THE BATTLE IS WON, BUT THIS WAR AGAINST WAR MUST CONTINUE!!

In peace, solidarity and love,